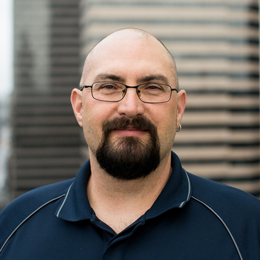 For the past 4 years, Joel has lived the life of a Dicken’s character in a Tale of Two Cities – trying to make a permanent decision between Tempe and Seattle. We’re happy to report he has exited stage left and has now firmly planted himself (and his family) in Seattle.

Joel started his career at a Building Envelope Survey and Testing Technician with a prominent Seattle remediation contractor in 1999. He continued upward becoming a Superintendent/ Project Manager in 2003, and then a Special Projects & Testing Division Manager in 2006 at the same company. In his management of special projects and testing division, he was responsible for sales, estimating, budget management, schedule of personnel and management of his own projects in addition to the oversight of projects run by another Project Manager.

His decision to move his family to Arizona came in 2012 where he went to work as a Project Manager/Estimator for a caulking contractor for 4 years. Within that time he took a 6 month break working with Amento Group as a Field Technician. We are excited to have him back, now as a Project Manager where he is a team player, embracing continuous improvement and pragmatic problem solving to provide value to our clients.